Diary of a trans

It’s been exactly three yearssince that first pill, March 4th, 2016. Two years, from breast surgery, March 11th: I remember the day because it was my sister’s birthday, and we all celebrated together in my small clinic room. An infinite amount of analysis, e-mails, letters, stories, blog posts, emotions, an infinite time that has passed in the flutter of butterfly wings.

Maybe it’s because March is the month of Spring and rebirth, but it seems to bring me luck. I have changed a lot: my body has changed, my mind has changed, my attitude has changed. And when someone says to me: “You have changed” I think “Luckly!”, because if I at the age of 30 I was still the old me from from ten years ago it would mean that I didn’t learn a thing from my life, and everything I have experienced wouldn’t have mean a thing.
I have changed, indeed, I have matured. Luckly.

So here I am, three years later, to tell you about my life as a transexual woman. Another small step, another small conquest: the registry change, the judge sentence, the new documents, all those months that I had to wait, powerless. I’ve never been good at waiting, by the way. Then one day my mother wrote me a message: “You no longer exist”. She was at the doctor’ to get me some medicines, but Enrico Scielzo no longer appeared in the database.
I felt like my heart sank for a moment, and that was a new beginning. For the Italian state I am officially a woman. I’m officially Enrica. I’m officially me.

During my lookmaker academy, each of us trainees had to be “analyzed” by the others. They had us remove all of our makeup and put us in front of a huge mirror with dazzling lights, with our hair pulled back, bare skin. I felt defensless. Showing my face without makeup always makes me feel like this: more vulnerable. I had already experienced this feeling on the Camino de Santiago, but finding myself in front of ten other people who scrutinize your every little detail, every little flaw, is a test of courage too. As I sat in front of the mirror, however, my colleagues began to tell me how much more beautiful I was without makeup. At first I thought they were just trying to be gentle, but now I know they really meant it: I could see it on their faces, sense it in their voices. It was not pure courtesy or female solidarity: they thought I was pretty. And they thoght I was pretty without makeup, without anything, just the way I am; this was such an epiphany form e that it almost brought me to tears, after so many years of sacrifices, struggles, after years of feeling wrong and full of doubts, questions, fears, insecurities. Standing in front of that mirror – a few days before my 31th birthday – with a bare and red face, a shadow of dark circles and some wrinkles, I looked in the mirror and finally saw the woman that I wanted to be – maybe not quite perfect, but authentic. And knowing that others see the same thing in you, shakes you up the heart in the sweetest way possible. Maybe some women who are born biologically females don’t even realize their luck: you wake up and you’re a woman. That’s it. You are of course: you are a woman to your friends, to your family, to your partner, to your country, to the postman and to the baker. But for us transexual girls it is not so simple: we know we are women, but we must conquer it; and it is a continuous struggle, every day, even for the most stupid things, like the name on your ID. Something that nobody would ever even think about, because it’s one of those things that you take for granted – don’t you? The name on your documents says who you are, or at least it should.Well, not for us: we have to earn that too, we have to go to court, waiting for months, hope for a judge sentence to decide that we can be who we wanna be. It’s not our parents to give us the name, but a person we don’t even know. Maybe that’s why we give more value to our feminine side, to our woman identiy, to our body, to our appearance more than many others: because we have the feeling that we deserved it. Even our name – the most natural, most intimate, most specific thing we have – we got to earn it. But we are good at not showing it, not crying over it, not complaining. We only show how happy and thankful we are for what we have achieved.

After my tv appearence on Nemo – Nessuno Escluso I have read many comments on the Internet, some very positive, others and stupid and negative that, even if you expect them, they really knock you down and make you feel discouraged towards the human race. Comments like “He just likes to take it in his ass” show how mean human beings can be, “men” – if they can even be called by that name – who don’t even have the courage to put their face on it and all they can do is just comment anonymously behind a computer. The thing that I’m most sorry about, however, are the comments of many women like: “He’s a man and will always be a man”. Thanks kind and sensitive human beings, I expecte a little more empathy and solidarity from you!

The sacrifices, the costs, the pain that a person like me has had to face to achieve this state of grace- regardless of what you believe or not – are enviable efforts that most people do not normally apply in what they do. And if you come and tell me “Nobody forced you”, it’s like saying it to a new mother who admits that giving birth was painful, because being a trans is a little a bit like this: giving birth to a new life.

I think that this strength of mind, in this perseverance, in this constancy, in this dedication in pursuing one’s goal and one’s happiness is only to admire and to learn from – and I’m not saying this because I am trans, but because I really believe that to do what we do it takes a heart that not everyone has. For me, being trans is not a shame, but a reason to be proud of, because I took my life in hand and I did what I wanted – and I don’t know how many peolpe can say they did the same.

Sometimes I think I have wasted my life, my best years, to live an existence that was not mine. I will have no memories or photos of Enrica as a child; I have not lived my life as a young girl, I could not put on a nice prom dress nor will I ever be able to give birth to a child. I attempted suicide twice when I was younger because I was not living the life I wanted, but I’m still here. Evidently it was not my time to leave. Maybe I had to be here today to tell you these things, so that no one in my situation feels wrong anymore. I do not deny that it is difficult sometimes and you just wanna let go and disappear, but among a thousand reasons to die I always find one to live. My parents. The smile of my nephew. My sisters, who raised me as if I were one of them. Gummy bears. The smell of the rain. The color of the sea. A nice hot bath. My dog ​​when she falls asleep on my lap, and she doesn’t know what evil means.

There are many things I have done since I became trans: I quit smoking, I did the Camino de Santiago, I started my own business, I learned to cook, to take care of myself, of my home, of my relatives; I traveled, I discovered places that I love, I met people who I then lost sight of, I adopted a puppy, I was interviewed by Selvaggia Lucarelli and I have appeared on my favorite magazine Elle. I did a prime time live on a national TV, I gave two conferences at the University of New York, I took a photography course, I started studying again and I started teaching, I learned to be patient – even if not yet I am very well – to have more confidence in myself and in what I can do, I’ve learnt to take risks, to love other people and – most important – to love myseldf. I did so many things – those little things that I didn’t do before because I didn’t believe in myself and, to be honest, I didn’t car either, because they didn’t recognize my body and I felt I was living a life that didn’t belong to me. But then I blossomed. I have invented a new job for myself, a new life, a new identity. The name, however, is always that. What my parents gave me, and they asked me not to change: Enrica. Which I hated before, but now I start liking it: it’s unusual, regal, a little retro. Like me.
Becoming a trans is not a whim to take off, it is not a whim or an unbridled desire to fill a bra, going around in heels or put on some lipstick. It is a visceral need, a conquest and a reconquest of oneself. It is a world that has always belonged to us, but that perhaps we never had the courage to explore.

At least, until today.

Makeup by Alessandra Righi, styling by me. 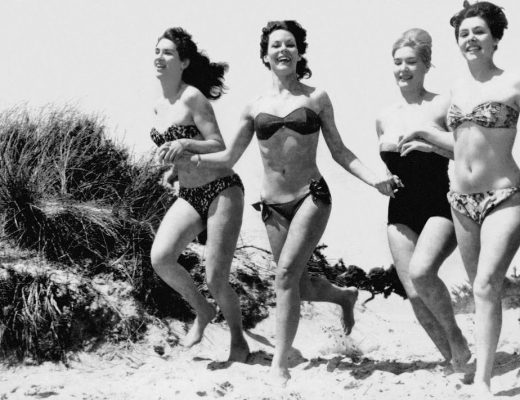 STORY OF THE BIKINI AND BEST BIKINIS IN FASHION