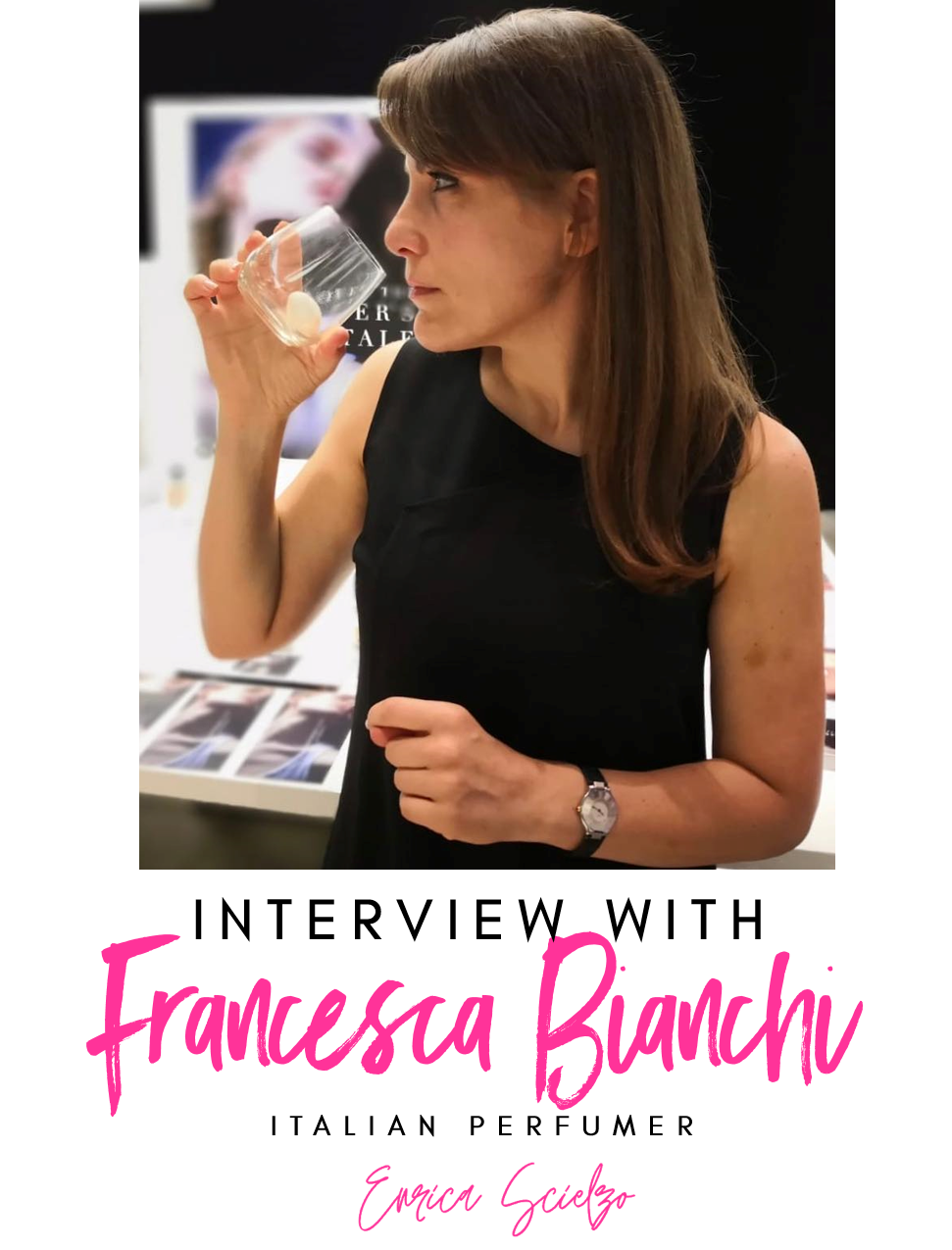 Clear, beautiful blue eyes and an irresistible Tuscan accent that makes you fall in love with her as soon as she speaks; a straightforward, true, authentic person who has made herself, capable of creating irresistible fragrances halfway between Heaven and Hell, between sin and pleasure. Francesca Bianchi is one of the rising stars of independent and niche perfumery, who has achieved such a great reputation as to be included in all the lists of the best perfumes on blogs and platforms dedicated to the subject. Her secret? She tells us about it in this new pinkTERVIEW entirely dedicated to the scented universe of Francesca Bianchi perfumes.

Unlike many noses, you did not study perfumery in a conventional way, but you did it self-taught. What are the main difficulties you encountered on this path?

In hindsight, I realized that I embarked on a gigantic path, full of obstacles, frustrations, dead ends, second thoughts, because now that I’ve learned a little bit I recognize that the extent of my ignorance is incalculable! So I try to focus on specific projects, trying to increase my knowledge in relation to them, without the ambition of being able to dominate the whole subject.

Of course, the possibility of canonical teaching – that is, of a systematic and complete explanation and of someone to correct or guide the learning path – is a huge advantage that I have lacked; there are – however – some cornerstones on which I have I was able to found my growth and, let’s say, the possibility of going out with jobs that had a meaning, a structure.

First of all, discipline and perseverance – characteristics that accompany me from my youth – sometimes the result of stubbornness and personal challenge.I also made use of many technical books, the help of some friends perfumers who gave me valuable information, among which I cannot fail to mention Roberto Dario and Giovanni Sammarco.

But the most important cornerstone in this whole enterprise is the artistic vision, the will to investigate my interiority and my emotions: this is the compass that shows me, step by step, the material first to be added, gradually, in a creation in fieri. I want to create something that gives rise to emotions that cannot be expressed in words, states of mind that only the smell can specifically arouse. Without an artistic direction – and I don’t mean the olfactory image to recreate, but the sensation, the emotional spark I want to represent – without this I don’t even sit down to compose something, I can at most experiment with combinations or work on reconstitutions or bases.

What was the first perfume you created among those currently on the market?

To continue the tradition of terrible feats, when I decided to go out with my line I chose not one but three of the dozens of experiments I had in the pipeline. Choice that now seems to me wicked, but it worked!

Angel’s Dust had to contain everything that I could find powdery, thus giving the impression of a seductive and innocent woman at the same time, a slightly rococo imagery, dusted with powder and malice. Sex and the Sea starts from a base I studied that recreates the smell of my skin at the sea. An intriguing and comforting smell at the same time, made of coconut lotion, salt, sweat. The Dark Side was the result of my search for my incensed, oriental, opulent perfume, with a richness so thick as to be dark, but with a very soft and seductive heart.

(Not to mention, these are my 3 favorite perfumes of the whole line, ed.).

You live in Amsterdam, the emblematic city of transgression: how does this milieu reflect in your works? How much do you think living in such an open-minded city has helped you in your work and in your life?

It’s hard to say. The transgression is found in any city, if you dig well. Maybe Berlin – where I lived in my youth is a bit further ahead – I don’t know. Of course in Amsterdam, due to the libertarian and tolerant Dutch culture, transgression is experienced in a more ‘normal’ way, it is not a recluse and for this reason there is no need to flaunt it to affirm it, it coexists quietly with the very bourgeois aspect of a children-friendly city. As if everything were allowed, as long as each respects the other – this is the principle of Dutch freedom. Nobody imposes values ​​on you, but you must respect those of others.

That being said, the possibility of associating with people who find serenity and freedom in defining their identity, work but also of gender and sexual tastes, this relaxation without censorship but also without morbidity, has certainly influenced my path towards the sensory pleasure of smell and the investigation of my emotionality and sensuality.

And what do you bring with you from your native land, Tuscany?

Actually, a lot, maybe more than I even realize! I don’t like to indulge in the banal cliché of comforting olfactory memories of childhood, but inevitably they carry with them and mark us: lavender, honeysuckle, roses from Mum’s garden, chamomile fields near home, wild fennel that we went to look for in the fields with my grandmother, the scent of incense and stone of the church of my country, the scent of the wine that my father bottled … My parents were artisans, and I met many other craftsmen with very refined manual skills, in the clothing and leather processing. Seeing the production processes, understanding how things are done is a baggage I carry around and helps me in the development of new projects.

I also had the good fortune to meet Lorenzo Villoresi, in a moment of great existential uncertainty. His encouraging words led me to think of perfumery not as an unattainable dream but as a possible goal to work towards. Who knows if he remembers it, but I’m always grateful to him…

Firenze, Amsterdam, but there’s another place that has influenced you work and your life: Marrakech…

Morocco is a country that I like very much, and Marrakech in particular has remained in my heart. The first time I went there for a while on an adventure, and perhaps that feeling of total freedom I felt remained connected to that place. The second time I went back when I was studying perfumery without a precise plan, and returning to that city – where I searched for raw materials in places other than ordinary tourist routes – gave me the stimulus to think, sit down and make a plan…

On your social profiles, you often share reviews that bloggers and youtubers dedicate to your fragrances. How important do you think it is for a modern company to use new advertising and communication tools, such as influencers and blogs?

There are many types of companies, and I will only talk about those of my type, i.e. small companies led by one person, who is also the only person working, with little or no budget for old-fashioned advertising campaigns (print, television we don’t really talk about it). For companies of this type, bloggers and youtubers are certainly an important vehicle for making their production known. I don’t do paid collaborations, because it doesn’t seem fair to perfume enthusiasts who are considering putting my perfume at home, but I can count on the professional friendship of a series of influencers (youtubers, bloggers, instagrammers) whom I make known my releases and they decide freely whether to go out with a review or not.

I am fortunate to meet very correct people, both with 1,000 and 500,000 followers, who have as a priority not to please me, not to receive perfumes for free, if anything, to create quality content for their channel, thinking first of all of their audience. This is their first value, which I respect a lot, which is why I am sure they will be able to offer an interesting review and not a useless frantic celebration (when the number of ‘oh my God’ and ‘gorgeous’ exceeds 3 , we are in that case). Among other things, thinking about making your audience happy is the only way to grow, for influencers as well as for any brand.

I know you have a degree in Art History and have worked in art publishing for years. If Francesca Bianchi was a book, what would it be?

I don’t know how to choose from the thousands of books I have. I’ll tell you the first one that comes to mind to get out of this thorny question, but I could change my mind in a minute: Dostoevsky’s “The Brothers Karamazov”. One of the books that I liked the most, that I feel closer to the complexity of the story and of the characters, which speaks of greatness and misery, of lowness and moral heights, of madness and purity, of materiality and spirituality. I am fascinated by contrasts, I believe I am possessed by them, and I want to represent them through perfumes.

You have recently launched a line of body oils in your three most famous fragrances. What else can we expect from Francesca Bianchi in the future?

Ok, take your seats! I have many projects and I would like to do everything immediately, but you have to put your soul in peace and follow the projects one at a time, because the energy that the development of a new project requires is atomic (especially if a person is a control freak of everything like me). I am currently working on a series of leather accessories that I would call pop-fetish. I will create a new brand to represent this new vision, obviously there will also be dedicated perfumes.

Then maybe I told you that I am passionate (perhaps a fanatic is that more correct?) of cosmetics: in the past I have also experimented with formulations (with active ingredients, emulsifiers, preservatives, etc …). Clearly, for the development of a project I will rely on cosmetologists and formulators. The project is still in mind as I’m still pondering WHAT exactly I want to offer, so I’m not really on my hands yet. But the idea is there.

That said, my secret dream is to have a personal assistant: we’ll see if next year brings them… 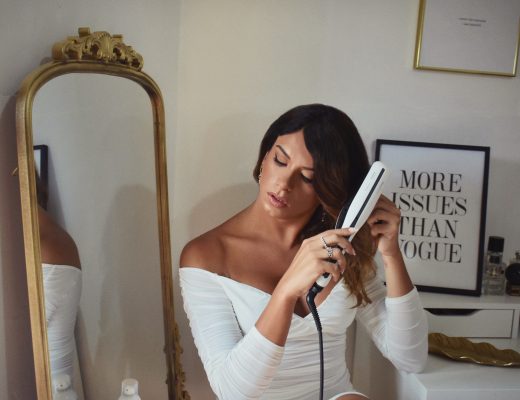